Where to Find Us:

We are open from:

We can deliver delicious food for your event. Find out more about our catering services.

We bring the Caribbean to you!

We bring the Caribbean to Bluffton! For years now, we have been the right address if you want to experience the Caribbean attitude towards life. Our events are known far beyond the city limits and our cooking is a culinary pleasure! 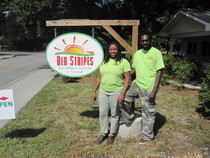 Get to know our team behind the bar and in the kitchen. Opened May 23,2012, Ezron and Lakesha have a combined food and beverage experience of over forty years. Ezron is from Jamaica where he worked at numerous world class resorts including Sandals and Half Moon. In 1999 he moved to Hilton Head where he has worked in several Country Clubs like Sea Pines, Hampton Lake and Hampton Hall. Lakesha, is a Native Islander from Daufuskie Island. The two met at Daufuskie Island Club and Resort where she first worked. Lakesha later help open Palmetto Bluff, an Auberge Resort. After years of working in food and beverage the two decided to open Red Stripes and focus on Ezron’s first passion Caribbean food. Ezron has an array of items on the menu. It is mostly Jamaican cuisine, delicious Jerk Chicken, curried dishes, and items infused with some Cuban influence. One item on the menu is a Saltfish and Tomato Salad; it is a recipe from his Grandmother who is a descendant of Cuba. You can also find some Gullah culinary treats such as Chicken and Waffles, Devil Crabs, and Sweet Potato Bread Pudding. The couple says one of the best things about working at Red Stripes is being able to create memories with the people they meet. They share the joys of seeing people eat Caribbean food for the first time or reminisce with them about their favorite vacation spots in the Caribbean. Ezron and Lakesha have created a place where when you walk into the doors you feel welcomed and transitioned to the “island feeling”. You can relax with some reggae tunes playing while trying one of the specialty cocktails Lakesha has created. You are guaranteed to have a grand culinary experience Ezron has whipped up. One can definitely say the couple has added some “spice” to Old Town Bluffton.

We love to hear what our customers have to say. Read the reviews or add one of your own.